The Causes and Valuable Lessons that Bloody Wars Taught the World 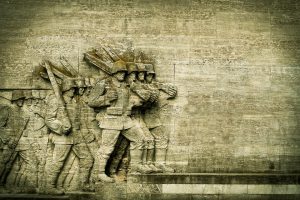 Even with the considerable advancements in technology, science, communications, education, and politics, war has not yet been eliminated in the world. Why then, even when history teaches that there are no winners in wars, do nations still wage war against each other?

If there is one thing that history teaches, it is to study the past to not repeat the mistakes in the future. Then it is vital to know what war is and what causes it to happen.

When different nations or states or even groups within a nation engage in armed conflicts and violent hostilities, the parties involved are engaged in war. It is when leaders fail to resolve differences and decide to pit their militaries against each other that war happens. And these armed conflicts come with heavy cost of lives and properties.

Wars, whether they be civil wars or world wars, have different causes. Here are some of them:

The Spanish Empire colonizes the Philippines, Cuba, and other countries—this is an example of a develop nation waging wars against less develop ones for trade and other reasons. Imperialism is also the cause of Aboriginal Wars that happened in Australia. The wars happened between the original settlers of the continent against the invading British Empire.

Nations go into armed conflicts against another to claim their natural resources as their own. An example of this is when Japan invaded China, Vietnam, and the Philippines to get access of oil and other resources in the said countries.

Examples are the Crusades against the Muslims, Protestants versus the Catholics, and the Sunni fighting the Shia. Religious wars are conflicts that resulted from intolerance of faith.

Some nations declare wars against other nations that they believe are inferior to them. Extreme nationalism can foster beliefs that conquering nations will bring honor and glory to their country. Nationalism can also be linked with imperialism and even racism such as when the Nazi Germany declared war on Eastern European countries that they believed were inferior to the Aryan race.

This happens when there is a massive disagreement within a country on who should rule or how the country should be run. The United States Civil War happened when some states wanted to secede from the larger unified states.

There are many reasons why wars start. Sometimes, these reasons are intertwined and are very complicated. It is hard to single out and pinpoint the exact cause why a certain country decides to enter in a state of war with another nation.

No matter the reason, it can be said that it is easier to enter into a state of war, but very hard to withdraw from it. Both the winner and the loser suffer huge loss of lives and properties. Lessons are learned after wars, but policy makers and leaders forget them to start another conflict. Here are some very important lessons that wars taught the world:

The two world wars could have been prevented if the leaders found a way to ease the tension that was building between the European countries years before. Today, with the help of international organizations such as the UN, G8, EU, and G20, nations have a venue to talk and iron out differences before war breakouts. Nations must talk first, and force conflicts should always be the last option.

Experts and leaders of nations alike thought that World War I would be a short war with minimal lives lost. War proved them wrong when the first World War became a war of attrition and causing millions of soldiers dying. It is also happening with the Afghanistan War and Iraq War. The Bush Administration predicted that the occupation of the two countries will only take eight years. Fifteen years later, the American forces are still engaging with the war. War is unpredictable as using force is a “combustible event” according to veteran diplomat Nicholas Burns.

No world major powers have declared war with each other since 1945. This is the result of the realization that any major armed conflicts will result in a worldwide catastrophe. Together with the advent nuclear weapons, countries are now more careful in dealing with each other.

Memories of the devastation of Hiroshima and the millions of lives lost in the two world wars haunt nations. However, memories and lessons can fade out and be forgotten. That is why it is important to remind leaders to study history and learn from the lessons that past conflicts try to teach to not repeat the deadly mistakes during those times.

Dennis J. Ottley is a retired soldier who saw action during the Korean War. He became a businessman after retiring from the armed forces and established his own real estate business. He decided to write about his war experience to enlighten and remind readers about war and its effect. You can read his insights in his book—Remembering (Korea: 1950–1953). If you are interested in knowing more about Mr. Ottley’s experiences and insights, please buy and read the book. You can also reach him through his Facebook, Twitter, and Goodreads for inquiries and questions.